ICPV members may be taking part in conferences by giving  presentations about their experiences or they may be there to learn and to  engage in debate with clinicians and researchers. Conferences represent an  important opportunity for us to raise awareness of the work of ICPV and the  assistance that we can provide in research design and conduct. Our members are  active participants in Q and A sessions at conferences.

Where possible, members write-up reports of the conferences  they attend, to be shared with other members through our web site and active  Google group.

Pat Fairbrother recieved a scholarship from the Alamo Breast Cancer Foundation to attend the 2018 SABCS in December 2018. See below for her summary and view of the event.

This was the first meeting of the new ECMC - UK Therapeutic Cancer Prevention Network.

This multidisciplinary meeting addressed the enormous opportunities and some of the challenges faced by researchers in the field of therapeutic cancer prevention.  It drew on examples spanning from ‘bench to bedside’ and beyond, to highlight what advances in basic and translational science can bring to the prevention trials of the future.

As a member of the UKTCPN Steering Group ICPV member Mairead MacKenzie spoke about the issues regarding PPI in this challenging area of research. Click here to read her presentation.

Members of ICPV and the ECMC PPI Group attended the annual meeting held at the King's Fund in London.

The day started with a series of papers celebrating the work of the ECMC network. This was followed by an extended lunch break to give everyone a chance to network and discuss current research.

The afternoon session was split up to encourage debate on some key topics. These included Research Biopsies, HRA Approvals, Precision Medicine and Adaptive Design.

The day was an excellent overview of the work of the ECMC and it was good to see the PPI group at its centre.

Britain Against Cancer, hosted by the All Party Parliamentary Group on Cancer (APPGC), is one of the largest conferences of its kind in the UK and is an annual fixture in the Westminster calendar.

The meeting was attended by professionals from academia, research, health care professionals, and significant attendance from ICPV and other patient groups. There were a few trade stands which were well attended and covered areas such as informatics and sample collection and storage. Biobanks exist to facilitate research which is important for the progression of stratified medicine. Biobank work is supported by a number of organisations, including the British Heart Foundation. 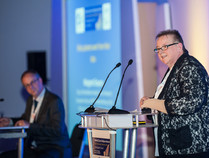 ICPV member Margaret Grayson highlighted the need for good data and promoted the Dragon's Den. To quote Richard Stephens Margaret's presentation was "For me it was just a perfect example of an Independent Cancer Patient's Voice being thoughtful, being rational, and being heard." Click here to read the text. 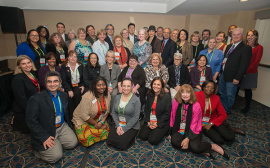 The American Association for Cancer Research (AACR) is the world’s first and largest scientific organization focused on every aspect of high-quality, innovative cancer research, from bench to bedside. The mission of the AACR and its more than 35,000 members in all fifty states and around the world is to prevent and cure cancer through research, education, communication, and collaboration. Our members include basic, translational and clinical researchers, physicianscientists, patient advocates and other leaders in the cancer research and care community”.

ICPV member Pat Fairbrother joined 30 other advocates at this event. Click here for her notes and go to the AACR website for more information.

Patient advocate groups from ICPV, CPRG, the Royal Marsden joined with staff from the Institute of Cancer Research and the Royal marsden to debate the issues around the increasing need for multiple research biopsies and the implications this might have for trial recruitment. A summary of this informative and enjoyable day can be found on our download section.

ICPV Members attended this event for the first time. It proved an excellent meeting point to interact with surgeons. Jacqui Gath was sponsored to attedn this event and her report of the conference can be read here.

EORTC is an independent research organization dedicated to investigator driven clinical trials and translational research and has not only an impressive track record in establishing ‘state-of-the-art’ treatments but also in ensuring that new cancer agents are developed and tested efficiently with the aim of minimizing delays between laboratory discovery and their therapeutic benefit for patients.

Over the years, the EORTC has adapted its structure and expanded its premises to respond to the challenges of modern cancer clinical and translational research.

In 2013 they developed a survivorship task force and in January 2014 they ran their first summit.

Carolyn Morris who sits Psychosocial Oncology CSG was offered a place at this event. Click here to read her fascinating account of the summit and an insight into how things are done in Europe.

Pat Fairbrother was awarded an Alamo Breast Cancer Foundation bursary to attend the 2013 SABCS. The foundation provide scholarships each year to breast cancer advocates from around the world to enable them to attend the Symposium. The advocates have their own programme organised around the main event. They are given briefings every evening by key speakers to review and question the day's topics and breakfast sessions to discuss key issues.
Each advocate is given a topic to follow throughout the conference; once home they had to write up this topic for publication in the annual Alamo Breast Cancer Foundation Hot Topics DVD. (see our conference download page for her Hot Topic report which covered psychosocial and survivorship issues)

As stakeholders in the All Party Parliamentary Group (APPG) ICPV held a fringe meeting at this event. "Bank Your Tissue" was a debate cover tissue donation.

For a review of this and the rest of the day by ICPV member Lesley Turner click here. 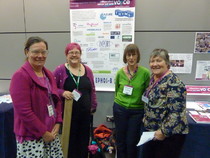 This years event was a first for ICPV. As well as having two posters we hosted a parallel session "The Issues around Tissues". For this session we had 5 speakers and a panel discussion chaired by Bridget Wilkins, St Thomas' Hospital. We focused on the research needs for tissue and blood, problems with consent and the complexities of carrying out research across borders.

"I was both impressed and educated by the Issue With Tissue session at NCRI Conference 2013. The quality of presentation was so good that it is the closest I have ever come to understanding the full range of uses for tissues in biobanks, and in particular it was a real pleasure to see the level-headed and balanced approach used by consumers in explaining to fellow patients why tissue donation is so important, and also to see the genuine teamworking between consumers and researchers.

The efforts being made by consumers and researchers to work together to explain and promote tissue banking show a workable model for similar partnership working in future, and the session itself was what a good consumer-led session should be; if the presenters had not said who they were, it would not have been possible to tell researchers from consumers. Many congratulations to ICPV in setting the standard for the rest of us!"

ICPV attended this years ECC in Amsterdam. We had a stand in the Patients Advocacy Square and 2 members attended the event on an ECCO bursary. It was organised by ECCO in partnership with ESTRO, ESMO, ESSO, EACR, EONS and SIOPE. The European Cancer Congress is the main multidisciplinary and multi-professional educational opportunity in oncology to take place in Europe – a fact that underpins the relevance, role and participation of each and every speciality in oncology.

For more information go to: http://www.esmo.org/Conferences/European-Cancer-Congress-2013

Click here to read Hilary and Lesley's report of the event.

The aim of the meeting was to discuss how biological and psychosocial factors should influence decision making by those responsible for the care of older patients with breast cancer.

There is an acknowledgement that a greater awareness is required for this rather neglected group of patients.

The meeting was held under the auspices of the International Society of Geriatric Oncology. http://www.siog.org

Click here to read Pat's summary of the day.﻿

The meetings were held to discuss changes made to consent regulations. In September 2012 The Department of Health announced that functions to advise on the use of confidential patient information without consent, according to regulations made under section 251 of the NHS Act 2006, would transfer to the HRA from the National Information Governance Board (NIGB) on 31st March 2013. This would include the NIGB's Ethics and Confidentiality Committee (ECC), which currently carries out the advisory function.

These events gave an opportunity to contribute to discussions regarding:

Click here to read Jacqui Gath's review of the meeting.

We are pleased to announce that the VOICE course will be residential and held at Barts Cancer Centre from 4-8 Sept. Click here for further details.

OPTIMA aims to improve the way we make decisions about whom we offer chemotherapy to following surgery.
Check the website link for more information or listen to the short video to explain the trial.
YouTube Video

On the 25th March we held an interactive talk and discussion on immunology.

The talk was given by Dr Edd James, Cancer Immunologist from the university of Southampton. The tallk is now available on YouTube - click here to listen.

Continuum Life Sciences are looking for volunteers who have survived aggressive, difficult to treat cancer against all odds to take part in their Long-Term Survivor of Cancer Study. For more information and how you can join go to their website.

Save the planet and donate to ICPV - send ecards go tour Fundraising page for mor information.

A one-week course of radiotherapy in fewer but larger daily doses was found to be as safe and effective as standard three-week therapy for women following surgery for early stage breast cancer. Trial results now published. Two ICPV members provided the PPI for this key trial. Full details can be found on the ICR Website.

ICPV was once again hosted by SHORE-C at the University of Sussex. Click here for more info.

ICPV Review 2018
We have at last published a new edition of our review. This was achieved by a grant from Novartis. Click here for more information.

Many congratulations to ICPV member Margaret Grayson. On 21 April 2018 she received the Iris Colvin Lifetime Achievement Award for Health, presented by the Women’s Forum of Northern Ireland. This is very well deserved for her tireless work in furthering cancer research especially in Northern Ireland.